You are not connected. Please login or register
Be sure as always to check out the rules here

» I dunno, I just want somebody to go on already :P

» Legend of the Dragons

» Rate the Avatar/Signature Above you!

» Ban the Person Above You

Legend of the Dragons

Legend of the Dragons

◇Prolouge
Yani, a fellow elder of Draco town, trailed her old tired eyes up the mountainside as falling stars streaked the sky, white against blue. "Whoo! Tashani what a sight! Ive lived for 74 years and never seen something quite as beautiful!" Her husband, Tashani nodded, "Your right dear, I cant take my eyes off you" Yani turned to him eyes sparkling and was about reply when the ground shook, "Oh my! She gasped reaching towards a tall rock to steady herself, "Tashani!?" she called the dust making visability impossible, "Ta...Tashani!!!" She gasped then froze as a slender green snake-like shape arose from the grognd "Rayqaza!" She gasped quietly. The Pokemon twisted in pain roaring and scratching at its snout. "GGGGGRRRROOOOOAAAAHHHHH!!!" It roared shaking the ground once more, its claws, fangs, and scales growing long and sharp. It turned towards Yani with red glowing flashing eyes, snarled, flew towards her then straight upwards bellowing into the once-calm night then changed direction towards the Sinnoh region....
-meanwhilez-
Crystal lie in the forest enjoying the stars falling in the sky, Beautiful huh Lucario? she sent the thought to him, her only lifelong companion since her parents were killed in a thunderstorm years ago. Hrmph I suppose... Crystal smiled, Same ol' Lucario she thought. Suddenly they both bolted upright as a pained schreech split the peaceful silence. "Thats a dragon!" She gasped, knowing too well from her own Pokemon. Her berwhilderment grew as a Rayquaza flew over the sky then disappeared among the trees still screeching its blood curdling scream That Rayquaza... Lucarios message burst in her made making her jump a little, "Um Yeah?" It had...a strange aura....Very....Black She frowned knowing auras just as well as Lucario, "Its corrupted" She mubled as Lucario nodded. "....It suddenly doesnt seem safe out here..." She mumbled getting to her feet, "Come on Lucario, Lets go to a Pokemon Center in Draco town" The Blue and Black Pokemon just nodded once more and they both walkeed towards the Town the stars still raining above forgotten.... 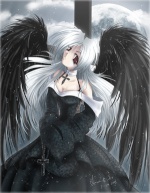 Tai Lin
19
Has shoulder length amethyst hair, piercing red eyes, slightly pale skin, wears a long black coat, long black pants, black boots, and a dark gray scarf that covers his neck and bottom half of his face as well as his nose.
Team:
Infernape, Torterra, Empoleon, Luxray, Staraptor, Gardevoir
(NOTE: Team changes from time to time. This is the team he uses the most.)
Sponsored content

» McFarlane Dragons....
» MARVEL LEGENDS ARES WAVE IN AUSTRALIA
» Marvel Legends you would like to see
» Brutal Legend
» Just got my first Brutal Legend
Current date/time is Mon Jan 20, 2020 9:24 am